Cuuuurse you, Adobe.  Curse you in the butt.

This!  This is a video from The Happy Hour Guys, who seem to pass their time traversing the countryside in search of the latest tasty brews.  I hate them.

But!  There’s always a but.  This episode they have journeyed from what I assume is afar to visit my fair Ann Arbor and, more importantly, my beloved Wolverine State Brewing Co., where I serve as humble designer/art director.

So, emptees.com came through for me today.  It was in their forums where I noticed a chance to get some free, full-color, die cut stickers from the guys at Stand Out Stickers:

Why they are doing this I have no idea, I was too busy preparing my file for print to even think about it 😛  “What file was that,” you ask?  It’s a surprise!

I know I’m a day late on this, but I figured I’d like to post it anyway.  It’s a view of a nice MLK bust across the street from my apartment, with my apartment in the background. 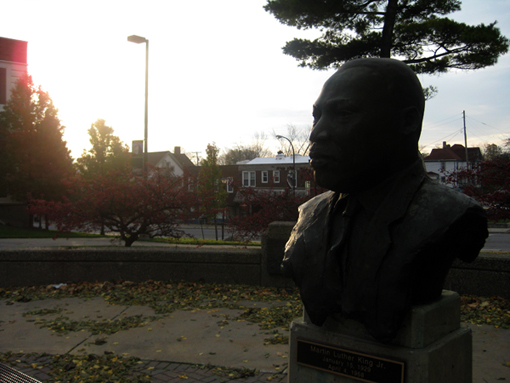 I hope everyone had a pleasant holiday and that you at least had a chance to ruminate a little on the legacy of such an incredible and transcendent American and human being.

Well, that happened.  Anno Domini two thousand and nine came, saw, and eventually left.  2009 was an odd duck in many respects.  To many of my friends & peers, 2009 will not be missed– characterized, such as it was, by especially tragic strife and heartbreak.  Deaths, layoffs, familial pyrotechnics, professional upheaval, romantic woes & skulduggery, and Lord knows what else all abounded in 2009.  The unprecedented frequency of raking discord and calamity in 2009 left many of my friends pining for midnight January 1st in a way they could not have expected one year prior.

Still, for other friends and loved ones, 2009 was a time of celebration– of beautiful new beginnings.  Several of my friends were married.  Several of my cousins had babies.  A few friends, often unlucky in love, found girlfriends.  New jobs were secured, tests were passed, goals were vaulted, prosperity was achieved.

As for me, personally, well, it was hard not to be affected by the plights of those close to me, but I was lucky in that their losses were often not directly my own.  I feel lucky to have not lost so much as them.  My year was, frankly, much better than theirs.  There art thy happy.

I am happy for other reasons as well.  I had some great experiences in 2009, including, for instance, an amazing west coast road trip with my girlfriend.  I also made some new friends, rediscovered some old friends, moved into a kickin’ new studio, and survived one more year of freelance picture making (albeit, just barely).

And so here we are:  The Spaceship Earth has crashed squarely into what is generally agreed to be the business end of a vaguely enormous cosmic object known as two thousand and ‘effing TEN, whose motives, personal hygiene, and big shiny ideas are ambiguous at best.  We don’t know what it’s like or what it wants– whether it’s here to rescue us from 2009 or if it’s somehow 2009’s evil chainsaw stepmother…  They tell me this is all rather unavoidable.  Personally, I think that if we had all just kinda stepped to the left at that critical moment in 2008 we may have dodged the whole mess entirely.  Never the less, here we are, in two thousand ten.  For the time being I can’t think of one thing better to do than to make nice with it and see what happens next.  I suggest you do the same.

Also known as, This Recession and All its Buddies can at Least Buy Me Breakfast.

Anyway.  I have been lacking client work lately.  There has been, as they might say, a dearth of client work.  And, left to my own devices, as they say, I have seen fit to spend my time doing all sorts of things that are–they might say– unproductive… For instance, I have been catching up on my reading (about 2,000 pages in the last three weeks thankyouverymuch).  But mostly, I’ve been making foolish stuff like the following. 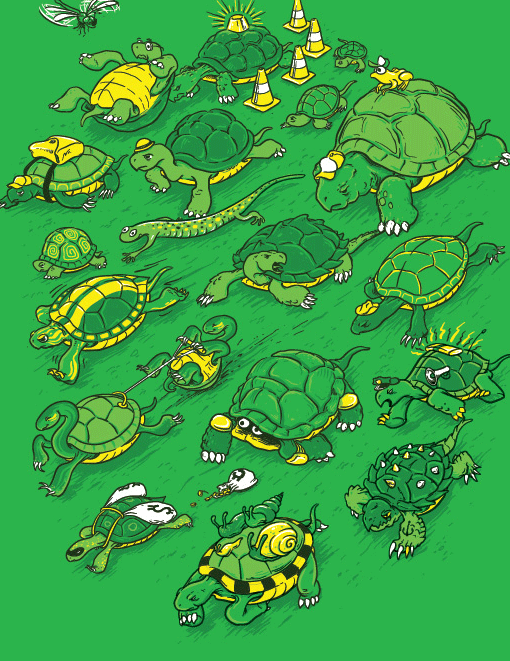 Something Strange, as they say...

Speaking of reading.  One of my recent reads was Cormac “Turbo Buzz-kill, as they say” McCarthy’s The Road.  Good book, but dire.  Nightmarish, as they say.  Jiminy Cricket.

Well, I’m back.  If there are any dedicated readers of this blog that found themselves unexpectedly disappointed by the lack of activity lately then I certainly apologize.  It’s been an intense couple months, fraught with personal matters that sapped much of the time and energy I typically feed head first to the hungry maw of leisure activities such as blogging.

But enough of that.  Regular posts shall resume, such as they were ever regular to begin with, in whichever sense of the word you fancy.  Cheers for now.

Yuck.  It’s been a rough week.  Started getting sick on Sunday, spent the next two days getting sicker and the previous two days in Chicago helping my girlfriend get her condo ready to be sold, which, for my part, involved some painting, some heavy lifting, and a fair amount of coughing.  Monday, however, was spent alone in Michigan and at the height of my varied “flu-like” symptoms (swine flu-like symptoms?) in a laziness-induced coma of sorts, during which a number of minor evils were visited upon me.   Most notable among these evils was the viewing of 1986 animated blockbuster, Transformers: Teh Movie, with Robert Stack, Orson Welles, and Leonard Nimoy (as Galvatron).  That seems to have had some effects which I currently perceive as both negative and lasting.  Although… when it’s not busy being inferior to the TV version in nearly every way imaginable, the movie can actually be sort of hilarious.  Allow me to demonstrate: “Me, Grimlock, not nice dino! Me bash brains!”

New header.  Any thoughts?  Specifically, thoughts on the new header?  And how it’s new and stuff?  And different than the old one?

Because I know it is.  New and stuff, and different than the old one.  In… ways.  What I need is for you (YOU) to assign value judgments to said “ways.”

— From title to thrilling conclusion, that may be the strangest, most gramatically bizarre post I’ve written this year.  If you’ve read this far, condolences.

Autumnal expressions, for example, might include rolling in piles of leaves and any number of things relating to apples or corn. Brumal expressions might include wearing inappropriately scant clothing outdoors and instances of tunneling. Vernal expressions of seasonally-dependent involuntary behavior are, as witnessed by the weekend of May 17th, in a word, exhausting.

There was no decision-making involved any of this. This was all completely involuntary.

Ever have a dream that you’re driving to the north pole to keep the Emperor of Japan from getting assassinated and that this is all totally plausible because the north pole is in the Detroit River up around Mt. Clemens? And that you would surely succeed in your quest if you could stop getting lost and making out with the woman (Monica Potter) riding shotgun in your Honda Civic?

The best part? Even in my dreams I drive a crappy car.

Just kidding, the best part was making out with Monica Potter.

Someone on the threadless blogs was asking people to post pics of their work space, so I figured why the heck not.

A routine snoop around my google analytics told me that some folks had tagged my Pterovulpine illustration over at a place called yayeveryday.com.  I think it’s an image bookmarking site, which is cool.  Anyway, nothing big but being a standard-issue attention whore I got a brief flutter of warm fizziness at the discovery.

What’s better than having a client (whom you personally admire) enjoy one of your concepts enough to pay you for it?  Having them like 2!

The previously blogged Great Lakes Myth Society also picked a sketch of mine to develop into a GLMS sticker.  The idea of the salty sailor bird has been kicking around in my dome for a little while now.  I’m glad I found a good use for it!

Cruisin' for a Boozin'

I finally have a new Threadless submission up for voting over at the ol’ Nude No More.  It’s for their latest “Loves” competition, the theme of which is “Drawing,” so natually I wanted it to be something that looked “dawn.”  Although in actuality, nearly all of my Threadless submissions are hand drawn to some degree at some stage or another in their development, but the final products have become increasingly vectorized of late in a cleaner sort of style that loses much of the expression found in traditional “drawings.”

Anywho, check it out and don’t come back ’till you’ve voted it a ‘$5’ in ten different fake accounts and left glowing praise in the comments sections :p

I don’t think there’s ever been a website I didn’t want to have to make more than the one I just finished skinning out the other day.  It’s a memorial website for my friend, Joe, who was killed in a car crash several weeks ago.  He was the little brother of one of my dear friends, Tom, whom I have known for about 1o years now.  I knew Joe through Tom, but also because I became one of Joe’s cross country and track coaches.  He was an outstanding person and he will be dearly missed.

The website we’re making for him also serves as the home of the newly innitiated Joe B Run Fund, which is a fund that aims to donate an annual scholarship to a chosen senior of the cross country team who embodies the qualities most admired in Joe.

Welcome to WordPress.com. This is your first post. Edit or delete it and start blogging!