Here are a couple new tees I made for the good ol’ Wolverine State Brewing Company.  That bottom one is SPORTY, eh?

There’s an old design of mine that I’ve been wanting to update with a flashy, typographic flair for a while now, and the other day I finally got around to it.  I’m relatively pleased with how it turned out.  This, of course, will do little to stop me from attempting to redesign it again in a few weeks. 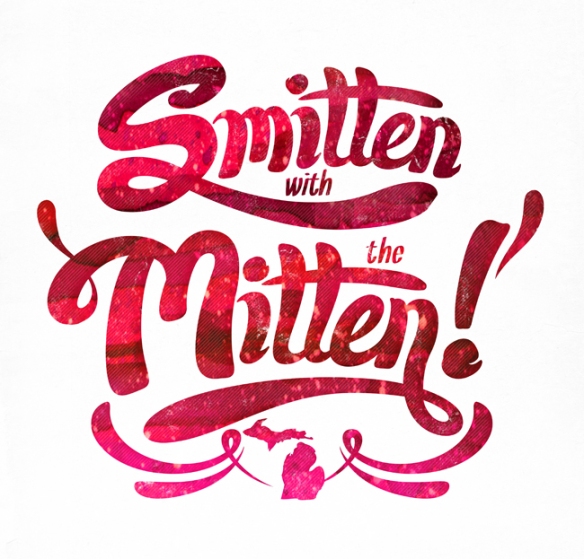 Below is the oooold version side by side with the sketch of the new version.

The latest Mighty Mitten print is full of dots. The state of Michigan is, in this print, defined by dots — whereas the actual state of Michigan is defined by imaginary political lines and, well, lakes an stuff. In this print, the role of imaginary political boundaries and lakes an stuff shall be performed by… you guess it… dots.

I made a new Mighty Mitten print recently – It’s a robin / apple blossom combo, with some other Michigan iconography to boost its potency. Anywho! You can buy prints and stuff by clicking on the image below.

That’s the line we’re going with around here these days, folks.

More to the point, I have created a bear.  It lives on tee shirts and makes the tee-wearer more huggable.  It could also very reasonably be said to lend the wearer extra strength, in addition to tiger-face and some sort of unqualified electric fish powers.

In short, this shirt gives you powers.

I designed this shirt with powers in mind because it is the official shirt of a very important & strange annual event, called “Tundig,” and sometimes extra powers are needed to fully understand or enjoy it, if not survive it.  Extra powers could come in handy when–while ensconced in a remote & undisclosed corner of Michigan’s northern Lower Peninsula–one must evade a Whiskey-Otter™, rise from the drunk, slay a wendigo, win a round of custom Apples-to-Apples, or, well, fight a North American Black Bear…

The shirt, which, after a hundred more words than I thought would be necessary to get to this point, is pictured below and represents the first shirt I’ve designed and printed in a while that was created –wait for it– just for fun. 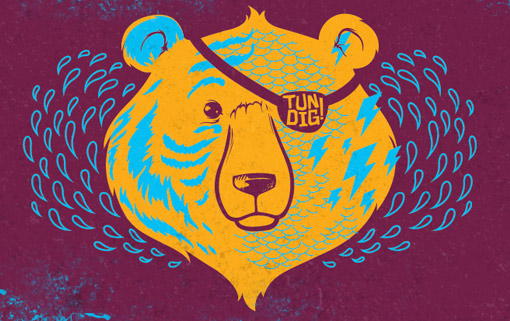 Fellow designer, citrón:ade, caught in an attempted demonstration of the motor-booty powers…

Happy January from the mitten, y’all.  Here’s a pretty bird with a pretty leaf and a pretty brumal color pallet: And here we have an entirely different 2009 in 2010 post– one in which a bunch of stuff created during 2009 and likewise intended for blogging in 2009 somehow gets all lumped together and blogged about here and now, in 2010.

Quite simply a drawing of a fire-breathing pterodactyl (FOR SALE):

I didn’t really realize it till I posted this, but these two pieces (somewhat poorly) demonstrate a shift in my technique, if not style (if I actually have such a thing) lately.  The pterodactyl was created in Illustrator by the pen tool, for the most part, with occasional lazy assistance from the pencil tool, and entirely with a mouse.  The portraits, while also accomplished in Illustrator, were drawn on my Wacom tablet using the brush tool. . . It’s one of my very first attempts with the brush tool/tablet combo and the closest I’ve ever come to actually “drawing” digitally.  Since this piece I’ve been practicing a lot more with these tools —with varying degrees of success— and, for the most part, enjoying it.  Perhaps 2010 will be The Year of the Brush Tool for me.  I kind of hope so, because dammit, the pen tool is slow 🙂 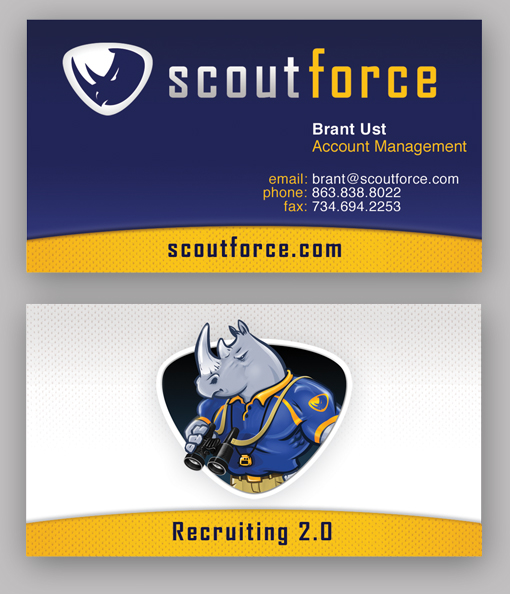 For anyone not in the loop, there is a place called “Up North” in Michigan.  There is probably a place called Up North in other states as well, but I have a difficult time imagining that it has earned quite the Proper Noun Status as Up North, Michigan.  It’s something of an institution in the nomenclature here.  That being said, if you’d like to know exactly where Up North is, don’t ask, because nobody knows.  Or rather, everyone knows but no one agrees.  Like pornography, they know it when they see it.  Everyone would agree that Traverse City is Up North.  Well, everyone from the lower peninsula anyway.  But ask a fellow if Ludington falls within the fabled confines and you’ll draw mixed remarks.

If you go far enough back in history there was a time when anything north of Detroit was considered Up North, with US-12 the acting boundary between civilization and wild frontier (Bear in mind, there is an average of only about 25 miles of real estate between US-12 and the Ohio/Indiana border).  Nowadays, I’d say a safer analog would be M-10, but I still might prefer an even more selective designation (I used to say, “Wherever the black bears aren’t,” but apparently that is far less discriminatory than I was able to appreciate).  All of this is, of course, just a very roundabout way of telling you that I went Up North last week (Frankfort, if you are interested) and that I saw an opportunity for a mini rant regarding perhaps the most general of Michigan’s many mythic regionalities.

As is fitting of a late evening journey Up North –mysterious place as it has been above described– my compatriot and I encountered some curious –if not epic– doom-type meteorological events at the outset of our trip, not far north of Ann Arbor.  It was documented on an iphone and later cut and assembled into the video embedded below.  This was all accomplished by my friend, Anna K Jonsson (one-time Up North native), whose brilliant choice in listenables may have taken some of the DOOM out of the experience, but none of the beauty.  I just wish an iphone had the same color capture capabilities as a peice of professional HD hardware, because damn, there were colors.  In any case, I’m quite taken with the vid, and not just because I’m in it. 🙂